STATE OF THE ART
The VA, SA and WA MG Engines

Unlike most articles on the history and technical content of MG and its engines, we appear to be going backwards! The XPAG has been looked at by me in these pages, and the MPJG of the TA Midget. It is only fair to study the other current engines of MG, and those will be of the VA 'One and a Half Litre', the SA 'Two Litre', and the WA 'Two Point Six' saloons. Saloons always get shoved into the background in MG circles, even though many became the foundation of some very famous cars indeed. The XPAG overshadows the immediate pre-war engines, the TPBG of the VA, the QPHG of the SA, and its bigger, improved brother fitted to the WA. These Nuffield engines were conservative designed, with cast iron head and blocks, alloy sumps and timing cases, all interrelated with interchangeable parts. Unlike the Morris and Wolseley models they were derived from, the MG's had four speed gearboxes, not three speed.

The story is similar to that of the TA's MPJG - the engines in the saloons were closely related to Morris units. The TA had the 1935 Wolseley Ten/40 Series 2 engine, eventually fitted to the 1938 Morris 10/4 series 3, a 1292cc ohv engine. This was developed from the 1931 Morris 10/4 Series 1 sv of the same bore and stoke, with an ancestory going back to the Bull Nose Morris. The stroke of 102mm was the family line, and the ohv Morris/Wolseley engine was used for the new MG TA Midget. The reason for the use of ordinary Morris based engines was the new 1935 company policy to commonise MG components with the other Nuffield built cars, and the end of a plethora of models. Nuffield six cylinder engines were a four cylinder with two extra cylinders, and visa-versa.

The 1935 'Two Litre' MG saloon also followed this policy, in that it had an engine borrowed from the Wolseley Super Six, of initially 206cc, 16hp, producing 75bhp, and the reason the car was named the 'Two Litre'. This engine was an overhead valve (ohv) conversion of the side valve (sv) Morris 16hp, of identical capacity. Fitted to the MG the engine used twin SU carburettors, with nice cast twin-three-branch exhaust manifolds with 'MG' cast on.

There was a Morris wet clutch running in oil, lined with cork, of Bull Nose vintage in design. There were some modern components, as the six cylinder engine had a counterbalanced crankshaft, something the TA did not have. Bearings were ancient white metal direct castings, and connecting rod little ends had pinch-bolts to locate the gudgeon pin, normal Morris practice lasting to the 1275cc 'A' series and 18GB MGB 'B' series engine. Oil was fed to the bearings at a quoted 80 psi, from a cast, ribbed aluminium alloy sump containing two and a half gallons. The mesh oil filter floated in the sump to stop it picking up sludge from the bottom. Cooling was by water pump assisted thermo-syphon circulation. Also modern was the coil ignition and distributor with vernier adjustment. Before production began, the engine was bored out to 69mm making it 2288cc, and 17.7hp. This was half a millimeter under the ohv Wolseley and sv Morris 18hp engines bore. This bigger engine was to cope with what was a heavy car. On this larger unit hot running oil pressure was 40 to 60psi. Many parts were interchangeable with other engines of the group, such as the four tappet tables, held on by two bolts. Two tables were used in the four cylinder engines, with three in the sixes.

The SA QPHG suffered many modifications, including a piston change at engine number 1165, having already been bored out to 2288cc. By 1938 the engine was again bored out, this time by the extra half millimeter, 69.5mm, to give 2322cc, commonising it with the Wolseley 18hp. Power was quoted as 80bhp on a 6.5 to 1 compression ratio. Like the TA engine, the stroke was 102mm, but the time it had grown to 2322cc to pull the large car, in an attempt to compete with the new SS Jaguars, it was a bit pointless calling it a 'Two Litre'. 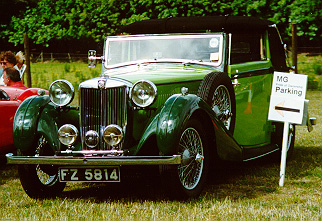 The MG VA One and a Half Litre ENGINE

The VA arrived in 1937, two years after the TA and SA, and it completed the company's product range. The four cylinder engine it used was that of the ohv Wolseley Twelve/48, which was in fact a bored out Ten/40 unit. The Ten/40 was 1292cc and the Twelve/48 was of 1549cc, hence the 'One and a Half Litre'. Like the TA unit, it was a converted Morris sv engine, again of 102mm stroke, with a 69.5mm bore. Note the same size bore as the six cylinder Wolseley 18hp, and later SA, allowing common pistons. Like the SA it had coil ignition, a ribbed alloy sump, and on the MG twin SU carburettors.

The VA was called a TPBG under the system of engine numbering. It used pump assisted thermo-syphon cooling. However, it did hide some modern parts: there was no counterbalanced crankshaft, but there was steel backed big end and main bearing shell bearings fitted part way through production, located by a dowel. Initially the VA used a cork in oil wet clutch, but later had a modern dry clutch, requiring a differing crankshaft and flywheel. Two crankshafts in a model only made for two years! What had happened to Nuffield's policy of common parts? These later VA units revved more easily that those with the heavy cork clutches. The 1549cc produced 55bhp on a 6.5 to 1 compression ratio. It could be bored out to 1705cc, and was so supplied in its Police specification. The Cream Crackers had this bigger engine fitted, as did Kimbers own VA. Some TA owners retro-fitted the VA engine, some boring out to the 1705cc, using Wolseley 18hp 73mm dia. pistons.

The SA was replaced by the WA in 1938. Its engine was of 2561cc with a 73mm bore, but carrying on with the Nuffield family stroke of 102mm. Like the XPAG was a better version of the TA's MPJG, this was a better SA engine. It had the counterbalanced crankshaft, with steel backed bearing shells, and a dry clutch. There was a full flow oil filter, and controlled expansion Aerolite pistons. The alloy ribbed sump held two gallons, and the oil feed to the bearings went via the water cooling system in a cooper pipe in the water jacket. This assisted fast initial warming up of the engine, and then acted as an oil cooler on hot running. Porting was separate, with a six branch exhaust manifold covered in cooling ribs. A nice polished alloy rocker cover sat ontop of the rubber mounted engine. The engine still had relatives in Nuffield fold, as it shared much with the sv Morris 18hp, and the similar new ohv Wolseley 18/85, though the MG had twin semi-downdraft SU carburettors, producing 100bhp on a high for 1938, 7.25 to 1 compression ratio.

1939 saw the end of these MG cars. All were using long stroke push rod operated, ohv engines, fitted with then new 14mm spark plugs. All had large air silencers on the inlet manifolds, to reduce intake noise and give an air of luxury with silence. The VA and WA were not continued with in 1945, only the updated TC, an improved TB. 1947 saw a new MG saloon, the One and a Quarter Litre 'Y', but it found itself a low production, as the Midgets sold so well and took up all the production space.

Also by 1939 Morris Engines had fitted full-flow oil filters to all its engines, with counterbalanced crankshafts fitted with replaceable steel backed shell bearings. All had thermostatically controlled cooling systems with forced circulation by water pump. Sumps were ribbed aluminium alloy, oil pumps well capable of maintaining pressures, even on worn engines. Pistons were oval ground to cope with expansion, and some had steel inserts to control expansion. The only real retrograde part still inside was the pinch-bolt little end. After WW2 Morris stuck to sv and small ohv, MG had the ohv units, and Wolseley had a six cylinder ohc VC22M. Things were looking good again, but only on the surface. Morris and Austin merged by 1952, and MG were dependant on Austin based engine from then on.