Discounting the 'modern' MG saloons under the Metro, Maestro and Montego banner the BMC 1100 based MG saloons were the top selling car in Britain for many years. Over 3 million 1100/1300 variants were produced between 1962 and 1973 with the MG versions proving to be amongst the most popular. The 1100 was quite revolutionary and was described in all the promotional literature as "the most advanced MG of all time!" This statement no doubt raised a few eyebrows from the ranks of the diehard enthusiasts and the car was at the time a most unwelcome piece of badge engineering. Launched at the same time as the all new MGB, the 1100 was somewhat overshadowed by the long awaited MGA replacement.

Nonetheless the 1100 had its part to play in the success of BMC in the early sixties. Originally there were plans to produce an MG version of the revolutionary Issigonis Mini that was introduced in 1959 and had dominated the small family saloon market for some time. However the Cooper name had become a household name after the specialist racing car manufacturer had won the World Constructors Championship twice and this was capitalised on by a Cooper version of the Mini. John Cooper sold the idea to BMC and both Austin and Morris versions were produced to cash in on the Cooper name. This immediately shelved any ideas of an MG badge engineered high performance Mini. Many design exercises were produced by the Abingdon design team, some of which were two seater based but sadly the Coopers won the day particularly as the Mini's designer Alec Issigonis did not think that the revolutionary front wheel drive set up was suitable for a sports car. BMC needed however a small saloon car to market alongside the fairly large Magnette saloon which by now was in Farina Mk IV style.

The American market was judged as being ready for an MG 'compact' and with this in mind the badge engineered MG 1100 was launched nearly a year after the first Austin/Morris versions were first seen. Despite the lukewarm welcome the car was an outstanding success from its introduction in September 1962. The MG version was far better appointed throughout with a twin carburettor engine and a distinctive MG front grille. It was capable of carrying 4 adults with comfort, whereby the Mini would prove cramped. The advanced Hydrolastic fluid suspensions provided exceptional ride characteristics and it was the first time that this system had been used on an MG. This new kind of suspension, thus eliminated the pitching problems associated with standard suspension because front and rear units were interconnected. Pitching movements were all but eliminated because shocks to the suspension were instantly smoothed out by an interchange of fluid between front and rear.

The 1098cc A-Series engine was mounted transversely in the front sub frame and carried an integral gearbox along the same lines as the Mini with drive through the front wheels. A top speed of 88 mph was easily achievable with the engine producing 55 bhp at 5,500 rpm and with good acceleration to match it was as quick as any of its predecessors. The 1100 was available in two door form initially with 4 door versions following later, it was felt that two doors went better with the sporting MG image! The two door version was to spearhead the attack on the American small car market which in 1962 was dominated by Volkswagen. The MG Sports Sedan as it was known cost £949, however there was a problem identifying which market MG were aiming at with literature and promotional films showing it as an ideal shopping car and at the other extreme, a car suitable for club racing, either way the car sold slowly with nearly 28,000 being sold over a period of 5 years.

By 1967 the 1100 was beginning to look somewhat dated its initial good performance, economy, and handling were being surpassed by competitors. The complete range of 1100 saloons were then given a face lift and uprated. The MG version now sported a 1275cc engine and the two door body was offered as an option. The fascia and instruments was dramatically improved and although initially known as the MG 1275 it was soon adopted as the MG 1300. Four speed automatic transmission was an option but in this case a single SU carburettor was employed. In manual form the engine produced a healthy 70 bhp and the model remained virtually the same until it was discontinued in 1971 in favour of the Austin 1275 GT, the only changes being in 1969 when the four door option and automatic transmission were dropped. There were other proposed MG versions of the 1100 that never saw full scale production, one being an MG badged Vanden Plas Princess that very soon changed its identity back to Vanden Plas in 1964. The BMC Spanish subsidiary, Authi, did produce an MG 1100 under licence alongside Minis, they were very similar to their English counterpart except they were left hand drive and carried Spanish instrumentation. A stillborn MG Victoria made an appearance at the Barcelona Motor Show in 1973 but never went on sale to the public, this was similar to a stretched Triumph Dolomite and was adorned with MG badges and a Downtown tuned engine. This was to be the last of the MG saloons until the arrival of the MG Metro in 1982. 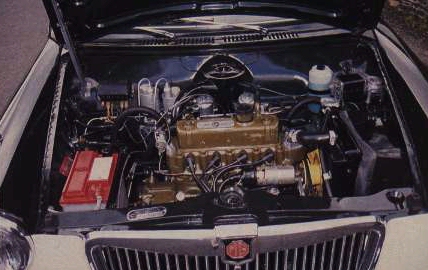 The concours MG 1100 we feature in this article is a 1963 model belonging to Ray Shrubb of Whitley in Surrey. Ray is only the second owner of the car and it came into his possession in December 1988 with a genuine 45,000 miles on the speedometer. 955 GYV at first looked in good order for its 25 years on the road but a rear end shunt had made its mark on the wing, boot and bumper bar. Ray immediately set to work to restore the MG to its former glory and was most fortunate to locate a new rear wing and bumper after weeks of searching likely ex-BMC agents. For the princely sum of £15 the parts were his and still had the original BMC labels on! After a total body stripdown everything except the engine was refurbished (the engine is this winters projects) and the results of Ray's hard work were rewarded with a class win in the MGOC concours at Knebworth this year. This was the first outing for the car and since then Ray has secured more firsts at several other MG concours events. Both Ray and his wife are very active members of Epsom MGOC and are on the comittee that staged Surrey '89 event at Leatherhead. Ray also has a concours 1275 Midget and an MGB GT and if the three MG's are not enough to keep him busy there is another project on the way, a 1500 Midget which I can confirm is an absolute wreck. No doubt we will see this restored to the same high standard as Rays other MG's.