It's Official! MG back at Bonneville with EX255

The following is the text of the official MG Cars press release, issued at a special press briefing at Gaydon on Thursday 28th May. A full-size mock-up of the car was on show, alongside last year's EX-F (now referred to as EX253) and the classic record breaker EX181, which last ran in anger in October 1959.

Whereas the runs last year were not officially supported by Rover, those planned for this August are being prepared with a proper budget and with a higher profile. In their quest for a driver the team have been lucky to obtain the services of Andy Green, best known for his daring exploits at the Black Rock desert. 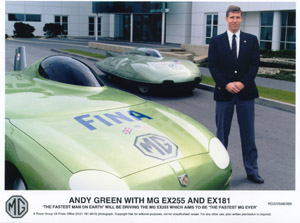 Release Immediate May 29, 1998
MG EX255 AIMS TO BE THE FASTEST MG EVER
- WITH THE FASTEST MAN ON EARTH AT THE WHEEL

MG Cars plans to record the fastest ever speed in an MG at the 50th Bonneville Speedweek festivities in Utah, USA, in August. The quest for a new record is greatly enhanced by the news that the car will be driven by Andy Green - the fastest man on earth - who achieved an astonishing 763.035mph with Thrust SSC in 1997. The team will attempt to exceed the long established records of 245.64mph set by Stirling Moss in 1957 and 254.91mph by Phil Hill in 1959.

Last year, when enthusiasts from the company's research and development division achieved 217.400mph with a near standard MGF, Nick Stephenson, Rover Group's Design and Engineering Director, declared that MG would return to Bonneville in 1998. This year's MGF derived car has been developed under the experimental project number EX255 - the latest in a tradition extending back to the 1920s. The number is significant as it is also the speed necessary to break Phil Hill's 1959 record set in the streamlined experimental prototype - EX181.

Andy Green approached MG when news of the return to Bonneville reached him last year and he offered the company his full support during the development of the project. By accepting the invitation to drive the MG EX255 at Bonneville, Andy follows in the footsteps of the great MG drivers who achieved so much for the marque in their quest to establish class Land Speed Records. To accomplish a speed in excess of 255mph, EX255 needs a power unit capable of producing over 900bhp. The V8 engine originally specified in the MGB V8, and more recently in the MG RV8, was chosen, then modified and highly tuned using twin supercharging, to propel EX255 to 255mph and beyond.

Andy Green said: "I was delighted to be able to join the EX255 team as the driver. Creating the fastest MG ever is going to be a terrific challenge which I think we are all going to enjoy. Additionally, I am looking forward to going back to America - to Bonneville this time, the traditional home of the Land Speed Record - with another example of the excellence of British Engineering." David Kewley, EX255 Project Director, added: "The EX255 project is true to the lineage that has made the name of MG so famous throughout the world. The excitement and enthusiasm that we all have for EX255 has been greatly enhanced by the news that Andy Green - the fastest man on earth - will be driving the MG at Bonneville. We are proud to have him aboard."

The special panels for EX255 have been fabricated with the assistance of Mayflower Vehicle Systems, the company that also builds the MGF production bodyshell. MVS is located on the original site of Motor Panels, the organisation that built the Bluebird record car for Donald Campbell.