Star of the above show was a special appearance of a new MG Saloon, an MG ZS180. Several hundred people during the day took the opportunity to get a close up look and even sit in the car. I was privileged to be able to test drive the car and take some exclusive for photographs for the MG Enthusiasts Club web site.

When a motoring journalist tests a new car they are expected to be critical, and quite rightly they often are. I recently (Sunday July 1st) found myself with the chance to take a test drive in a new MG and to be critical. But as a self confessed 'stalker' of the marque how could I possibly find fault with a car we have all been waiting for!

In a showroom near you very soon, you will find a whole new range on MG saloon cars, in the form of the ZR, ZS and ZT. The MG 'Tin Top' is back!!

The car that I drove was a MGZS 180, and the specification is pretty impressive you will agree, and apparently of all the new models is fastest accelerating and just 1mph slower than than the ZT190 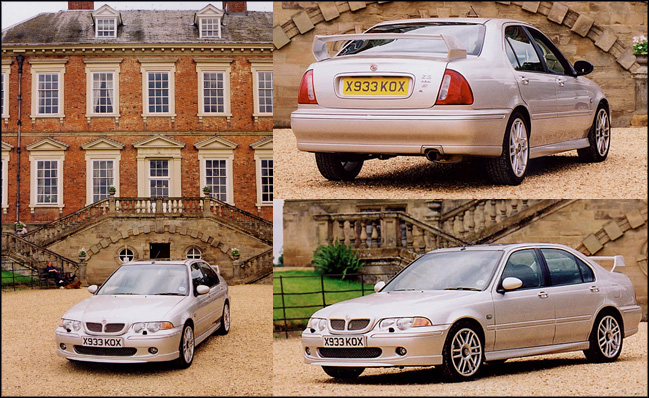 KF "The throttle was certainly very responsive, and the close ratio box and that short throw gearshift was a joy to use. The sports exhaust has a beautiful note to it. Though the car is fitted with air con, on a warm day you might want to drive with the windows down, because it sounds soooo good!!"

KF "The quoted performance fiqures are impressive too, and the car felt quicker than its 0-60 suggest, but there is nothing wrong with 7.3"

KF "The ZS180 is by far the best handling car I have ever driven, every thing about it just seemed right. My test drive though was very short (10 miles) did include a mixture of A and B roads with lots of bends and a variety of gradients. The test route also included a short section of Motorway."

KF "As you ca see from the photographs, the car looks stunning, lots of turning heads through the country villges and on the motorway. The 'Extreme' spoiler is just that, essential for stabilty at high speed, it does obscure your vision through the rear view mirror. The rear spoiler is not unlike that of the Subaru, and for fun we did park next to a Subaru for comparison."

KF "Our test car was the Platinum Silver, a colour I am very fond of, my very first MG was a Silver coloured MG Montego Turbo"

KF "Again the specification for the interior is impressive, and once your settled in the drivers seat behind that MG steering wheel you just dont want to get out of it again, I know I didn't.

Review and photographs by Kelvin Fagan