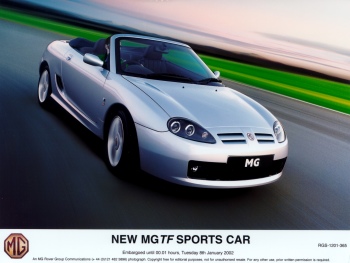 Launched progressively into world markets from February 2002 with an array of new improvements, the TF is led by its design, feature specification and driver enjoyment. In the UK market, the MGF has been the best selling car in the roadster sector for the last six years and the TF has been evolved to continue this tradition.

The TF carries a sharper, more aggressive and purposeful look, which was honed in both studio and wind tunnel. The improved aerodynamic characteristics play an integral part in the chassis development and maximise the benefits of the new suspension and steering changes.

The TF has a new front bumper, shaped to reduce front-end lift, with a framed lower air intake and the provision for ‘Fogstar’ fog lamps. All-new high-efficiency projector headlamps complete the frontal appearance. At the rear, an integrated effective lip spoiler incorporating a high-mounted stop lamp flows from the rear deck. The TF is lower with a greater dynamic appearance, assisted by its dart-like sill features and crisply-shaped air intakes.

The MG TF is a new generation of the MGF, that recognises the ‘real world’ affordability and practicality required of a fully-functioning everyday sports car. The modified front and rear subframes are solid-mounted and the new suspension features a 10mm lower stance. This benefits appearance, stability and handling with its lower centre of gravity.

The body structure has been stiffened in crucial areas to produce a 20% more rigid shell, producing an improvement in windscreen header vibration. Steering is now more responsive, with a completely new tune for the speed-sensitive Electric Power Assisted Steering (EPAS), with a 10% faster geared rack with revised characteristics to give a more progressive steering feel throughout the car’s speed range. On ABS equipped cars, braking distances have been shortened by 10%.

A four-model range provides customers with a spectrum of performance, style, affordability and specification. Designated by numbers closely linked to their power output, the range includes the 1.6-litre TF 115, the well-appointed 1.8-litre TF 135, the TF 120 Stepspeed with multi-function CVT sports auto and the range-topping TF 160 with the legendary Variable Valve Control K Series engine. The TF range spans a 118mph/190kph to 137mph/220kph speed range capability, with improvements to performance, economy and CO2.

New paint colours; XPower Grey and Le Mans Green are available on MG TF, with Trophy Blue and Trophy Yellow now extended to the entire range. TF also introduces three new optional hood colours – in blue, grey and green and new trim fabrics – Sebring and Daytona. Three new interior colours to complement Ash - Tan, Grenadine and Smokestone are available with matching tonneau covers for when the hood is folded. New alloy wheels include an eleven-spoke 16" design and the option of an ultra-lightweight.

Rob Oldaker, MG Rover Group’s Product Development director, explained: "The MGF has proved to be an amazing success having dominated its sector for the last six-years. The introduction of the new MG TF will enhance this popularity further. I have no doubt that the new TF, with its fresh new design style, new suspension with revised rear linkage geometry and a rich choice of feature specification and colour will produce even more exhilaration and retain MG’s sales pole position."

The first MG TF built will carry a 0101 VIN (Vehicle Identification Number) suffix, following an MG tradition that has used the last three numbers of the company’s telephone number - Longbridge is 0121 475 2101. Abingdon MGs from 1930 were started at 0251 (Abingdon 251), with MG Magnette ZAs and TF Midgets using a 0501 VIN following the company’s BMC Headquarters in Birmingham having the 1501 telephone number.