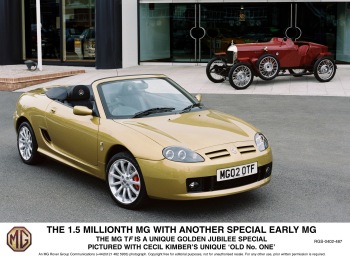 MG Rover announces today (16 April), the building of the 1.5 millionth MG car since production began in 1924. Over its 78-year history many characteristic varieties and designs of MG have made their mark on the enthusiastic motoring public and made this one of the most famous motoring brands. The 1.5 millionth MG produced today is the new TF 160. In celebration of H.M. Queen’s Golden Jubilee, it is fittingly painted in new Monogram Supertallic paint ‘Jubilee’ Gold and finished with special Jubilee badging.

MG has long been the by-word for sports car motoring and over its history, as illustrated in the attached listing, the proportion of roadster and sports saloon models produced runs at exactly 2:1, with the MGB itself accounting for one third in its own right.

In 1977 a similar project produced a specially prepared MGB GT finished in blue paintwork with Silver Jubilee livery, to celebrate the Silver Jubilee. This car was sold, with proceeds raising money for charity.

John Sanders, MG Rover’s group marketing director, said: "The MG marque is one of the most popular and enduring motoring marques, with a strong and enthusiastic following. The exclusivity of the MG experience is demonstrated by the 1.5 million MGs produced. This is no mainstream volume brand, but an authentic car capable of generating a rewarding driving experience for owners who demand more than just mere A-B transportation. The latest MG four model range delivers this exciting experience in a bold and dynamic way and is as authentic in its rewarding driving attitude as those that have been produced over the years."

It is significant that the 1.5 millionth MG should be the new TF, for it is the latest of a new range of MG sports cars and it currently holds the torch as the icon of the MG brand into the 21st Century.

The 1.5 millionth MG Golden Jubilee is painted in a new paint treatment under the Monogram programme. Monogram is a range of 20 exclusive paint colours, one of which is ‘Monogram Jubilee’, a light, bright special Supertallic Gold that is available for an Ł800 additional charge.

Specified around the top of the range TF 160, this celebration model has been fitted with optional fog lamps and passenger air bag. The seats are uniquely fitted with Oxford leather seat bolsters and central black Alcantara cushions and seat backs, which are embroidered with the Golden Jubilee crown logo.

On the exterior, exclusive badging includes official Golden Jubilee crown logos – on the four 16" alloy wheels and also incorporated into the ‘160’ ingot badge on the rear, next to the TF identity badging. Above the mid-engine side-intakes are the words ‘THE 1.5 MILLIONTH MG’. Finally, the MG is registered MG02OTF, so that there is no mistaking its special production significance.

The Golden Jubilee TF will be participating in a motoring cavalcade that finishes in the Mall on 4 June and in between, will be used to raise money, with the proceeds going to one of H.M. Queen’s nominated Golden Jubilee charities.

Every effort has been made to ensure the validity in the calculation of historic MG production. The most authentic and accurate records available have been used. Many MG models were produced in a multitude of body designs; 4- or 2-seater, saloons, open tourers, salonettes, sports, etc, so the saloon / roadster split is only an illustration of the popularity of body design rather than a specific record of individual body shapes, as records do not permit us to separate them specifically.

1924 – Cecil Kimber, Morris Garages General Manager, establishes a marketing niche for modified Morris cars that were sportier and faster. In a short time MG would come to stand for ‘affordable performance’ to a growing motoring world.

May 1924 – thought to be the date that the MG Octagon was first placed on the Super Sports Morris.

MG’s competition success in the 30s was characterised by a class win with the K3 at the 1933 Mille Miglia road race – the first time a non-Italian team had won.

The most famous TC customer was the Duke of Edinburgh, who bought the MG in August 1947.

Longbridge designed and manufactured the A- and B-Series engines, 50 years ago in 1952, for the MG Midget and Z Series Magnette, MGA and MGB.

The most famous MGC customer was HRH Prince Charles, who took delivery of his GT in 1969 (SGY 766F), which he recently passed down to Prince William.

The 1,000,000th was built in October 1975 – a unique LHD MGB roadster finished in Brooklands Green, with Jubilee GT livery and wheels.

Tuesday, 9 May 2000 – MG and Rover brands returned to British ownership, with Production, Engineering, Sales and Marketing centred at Longbridge and shares held by
MG Rover Group employees and its franchised dealers.