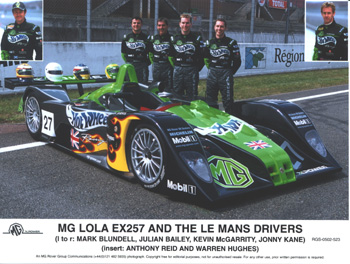 Following MG’s return to the 24 Heures du Mans in 2001, MG returned again this year with high expectations. Having qualified 6th and 12th overall on the grid, 1st and 2nd in the LMP675 class, they performed in the race at the highest level to challenge the more powerful LMP900 favourites.

From the very beginning of the race, the two MGs displayed significant pace, consistently leading their class and competing with the fastest cars on the circuit for a significant period of the race.

The first disappointment came after midnight on lap 129 when the car No. 26 (driven by Anthony Reid, Warren Hughes and Jonny Kane) retired with transmission failure, when running strongly in 4th overall.

MG car No. 27 (driven by Mark Blundell, Julian Bailey and Kevin McGarrity) carried on relentlessly through the night gaining positions and by early morning having completed two thirds of the race period suffered an engine problem on lap 219 without warning. Despite all the efforts of the driver and the team the dream was over.

Commenting on MG’s return Rob Oldaker, managing director, MG Sport & Racing, said: “Our ultimate aim when coming to Le Mans this year was to complete the race. We clearly made improvements over last year and have shown that the MG Lola EX257 is capable of performing with the fastest cars in the race. We are bitterly disappointed that we’ve not made enough progress in durability and reliability sufficient to complete 24 hours of hard racing. The drivers have done tremendously well to keep the cars in such good shape during the race and to keep the pressure on. A true team spirit with MG, CMS, Lola and AER pulling together was incredible and with the enthusiasm from fans and our sponsors was phenomenal.”

Mark Blundell, MG motorsport ambassador and driver team leader said: “It’s a huge disappointment. We lost car 26 last night when it had been showing tremendous potential – mixing it with the big boys. The squad with car 27 felt very optimistic that they could reach the end of this very special race and win the LMP675 class. It wasn’t to be despite the huge efforts made by the MG team and all its partners.”

KnightHawk’s #30 MG Lola 675 LMP was retired in the eighth hour due to a spectacular fire that all but destroyed the team’s only entry. The car’s pilot at the time ­ Mel Hawkins ­ walked away unhurt.

While traveling the Mulsanne straights at high speed, Hawkins was stunned to see a huge bolt of flame shoot right past him ­ from inside the cockpit ­ on his left side.

“I was on the straight, right between the first and second chicane, when all of a sudden a huge flame shot up the left side of the cockpit,” said the suprisingly calm Hawkins. “I quickly looked in the rear-view mirror and saw huge flames coming at me from the back of the car. They came clear over my head ­ almost like an explosion ­ although I didn’t feel or hear one. I never saw any smoke, or smelled any smoke ­ at all. I was probably about a quarter-mile past the first chicane, at a speed of about 150mph and all of a sudden it was just as if the car blew up! I pulled over as quickly as I could, and by the time I did get over there were absolutely no lights on in the car any longer. It was completely dark. I got out of the car as fast as I could, and as soon as I was out, with my feet on the ground I quickly tried to set off the on-board extinguishers. I couldn’t see ­ couldn’t find the button. At that point, I just got away from the car as fast as I could.

The team quickly retired the effort and Team Manager Mike Johnson has yet to determine the actual cause of the fire. Preferring to wait until the car could be inspected more closely, Johnson offered no guess at this time.