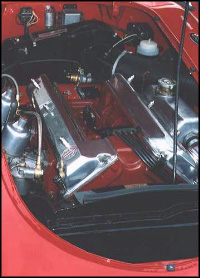 The original twin-cam engine was the idea of Gerald Palmer, the designer of the 1953 MG ZA Magnette, it's sister the 1952 Wolseley 4/44; the 1955 Riley Pathfinder and Wolseley 6/90. The ZA Magnette was offered to the public using the then new 1489cc BMC 'B' series four cylinder ohv engine. This engine produced 60bhp, later improved to 68bhp. The ZA was a fine sports saloon of its day, but Palmer tried to convince the new BMC bosses to build a twin-camshaft engine of his design, so as to be able to offer a 'GT' version of the ZA as well. MG were being starved of cash, as BMC would not even sanction the MGA at first, let alone another engine. Things did not lay idle for long though, as both the Austin Design Office,(ADO) and Morris Engines Branch, were permitted to design their own 'Twin Cam' engine.

Meanwhile the MGA was introduced to an excited public in 1955, using the ZA 68bhp ohv engine. This was improved to 72bhp in 1956 in the MGA, but the following 1956 ZB Magnette kept to the 68bhp unit.

Palmer had penned an outline of the engine he saw as suitable, but the two halves of BMC set about their own designs. The unit from the Austin office had been designed from first principles, on a clean sheet of paper. That from the Morris Branch was more relevant, in that it used the cylinder block of the MGA/ZB 1489cc. MGA cars with both the Austin and Morris Twin Cam engines were entered in the 1955 Tourist Trophy event. After this time the Austin engine was not seen again. This would easily fit the current MGA 1500 gearbox and engine bay. Breathing was always the limit on any engine's power output, so the double overhead camshaft ( dohc) cylinder head was ideal. It was an aluminium alloy casting, of the cross-flow design.

To fit the DOHC head to the 'B' series cylinder block, the heads studs were slightly repositioned and of a larger diameter. So successful was the design in improving the engine, it would rev quicker than some people could take their foot off the throttle pedal. The engine was easy to over-rev, and hence damage the internals, such as a piston hitting a valve. A cure that MG never used, existed even in those days, a rev-limiting rotor arm. The BMC recommended that fuels of at least 95 octane be used with N3 spark plugs for road use and 100 octane and N58R for competition. Oil fouling of spark plugs was often blamed on the spark plugs, but after the oil consumption problem was cured by later changes to the piston rings this was not a problem. The unit got itself a bad name for melting piston crowns and the company mistakenly attributed this to over advanced ignition timing. The distributor was changed to a positive stop mechanical advance type without vacuum advance. This did not solve the problem and so it was decided to reduce the compression ratio to 8.3:1 which prevented the pistons from melting, but had not solved the problem, only masked it. The problem was actually caused by the SU carburettors becoming lean due to the effects of engine vibration at certain RPM. This problem was already well known to other engine manufacturers e.g. Coventry Climax. It was even documented by BMC themselves in the Special Tuning booklet for the pushrod MGA if 10:1 compression was used. The 8.3:1 ratio dropped the power figures from 108bhp to 100bhp @ 6700rpm.

Zero to 60mph was in 11.5 seconds ( factory figure,) and in 1958 that was fantastic in a car of the MGA Twin Cam's price range. Zero to 100mph took just 30 seconds. Motor magazine testers said 0-60 was in 9.1 seconds; Autocar magazine said 13.3 seconds. The car prepared for the Autocar testers was obviously a poor one. The Twin Cam did an official 21mpg of petrol.

MG issued a small pink leaflet entitled 'Getting the best from your MGA Twin Cam'. It has, in large letters, " PLEASE READ BEFORE DRIVING". No doubt this was because the car was being used by owners who did not understand the requirements of, what after all, was a road-going racing car.( Leaflet is BMC publication ADK1412.)

The engine used a normal 1489cc cylinder block but with a bore of 75.414mm. With the 88.9mm stroke this gave 1588cc capacity. Originally the engine was intended to be a 1500cc unit but was changed just before production to 1588cc to take advantage of the new 1600cc engine class for competition. It was fitted with a ribbed, cast aluminium alloy sump, cylinder head, and front casing carrying the new position for the distributor. The 'camshaft' of the old block now fulfilled the use of a jack-shaft, ( called a half-speed-shaft by MG,) to drive the oil pump and tachometer. It also carries the sprocket for the timing chain. This shaft is gear driven, not chain driven as on the ohv engines, so rotates in the opposite direction to the old camshaft. The engine has fully floating gudgeon pins, ( wrist pins,) in solid skirt pistons with a compression ratio of 9.9 to 1. The head carries two cast-iron camshafts, with 20;50;50;20 valve timings, and 0.375" lift. The inlet valves are 1.6" diameter, and the exhaust 1.44" dia. Both are set at a 40 degree angle in the head (80 degree included angle) giving a hemispherical combustion chamber, ( hemi-head.) Double valve springs are fitted. For racing use, the exhaust valves are filled with sodium inside the stems. This leads the heat away from the head quicker, and was a common fitting to WW2 piston engined figher aircraft. Both cams are identical, apart from the timing slots; and both have hexagons cast in to enable them to be turned when timing.

The cylinder head, with steel valve seat inserts, although these are cast in position, was of efficient cross-flow configuration. The exhaust manifold was on the normal 'B' series side, but with two huge SU H6 1 3/4" carberetters, (carberetors,) with pancake air filters and a cold air feed duct, on the other side. On cars meant for racing, the SU's grew to H8 2" carbs. Interestingly, on the SU inlet manifolds, one securing nut is in the INSIDE of the port. Owners would Locktite and peen the threads, so as to not lose this nut into the engine. On cars fitted with after-market Webers and relevant manifolds, for racing, did not have any nuts inside their manifolds. To feed fuel to the two carbs, there was a high capacity, high pressure LCS single ended SU electric pump fitted, similar to that fitted to the Jaguar XK's.

To hold the solid skirt aluminium alloy, convexed head pistons to the crankshaft, 'H' section forged 55 ton, alloy-steel connecting rods were fitted. These were the normal angled split big ends type, but without the pinch-bolt little end arrangement of the normal ohv unit. No oil spray hole was drilled in the rod end either, for bore lubrication. The fan was of five blades, not the normal two or four of the other cars. The engine was originally a BC16G numbered type but was later changed during production to BC16GB to differentiate it from the upcoming pushrod MGA 1600. Later cars had the inner wing splash panels capable of being removed, (inner fender panels,) to give better access to those hidden components, with a front wheel off. Also 5 holes were made in the front chassis crossmember to facilitate removal of the engine sump. All you could see under the open bonnet was two massive, polished alloy camshaft covers, it must have been a swine to work on in situ.

Early cars used the MGA/ZB Magnette’s 4psi cooling system, but later this rose to 7psi. Again, the distributors had a vacuum advance from the MGA/ZB, (type 40510B,) but this was later deleted and replaced by distributor, (type 40718A,) with no vacuum advance. It was often retrofitted to many earlier cars. From engine number 1523 the ignition markings were stamped on the distributor, (22-26 degrees advance at 3000rpm.) Distributor drive gears would wear rapidly if the distributor was not fitted in position exactly as described in the Workshop Manual.

Some engines suffered from fracture of the tappets. This would normally lead to follow-on engine destruction. It was mistakenly believed that this was due to the tappets tilting and locking in their bores and the length of the tappet was increased from 1.25” to 1.50” at engine 1087. However this did not cure the problem and a second incorrect diagnosis was that the tappets were picking up aluminium from their bores and seizing, and so cast iron sleeves were fitted to the tappet bores at engine 1587. The fractures continued until it was finally realised that the tappet material composition was incorrect. At engine 2211 molybdenum was added to the tappet material. All fractures ceased and many engines were retrofitted with the new tappets. These can be recognised by a large 45 degree chamfer on the top edge. This chamfer was to allow BMC service mechanics to check if the change had been carried out by merely removing the camshaft covers. The camshafts were chain driven off the half speed shaft, itself driven by a gear on the crankshaft nose. This was a long chain, and needed to be tensioned/timed correctly. The chain could stretch in use and adjustment was very important. The tensioners were aluminium and the threads could be pulled out by the constant whipping of the chain, after high mileage. This can be cured using a helicoil thread insert, or fitting aftermarket steel tensioners

At engine number 315, the number of teeth on the gears on the half speed shaft and matching oil pump drive spindle were changed to reduce wear.

The oil consumption on early Twin Cam engines was extremely excessive. This also caused fouled spark plugs. The piston rings were changed on several occasions with the latest changes being late in the production period at engine 2057. The main changes were the replacement of the top chrome ring with a cast iron type and a new scraper ring with an expansion ring. This resulted in a normal oil consumption.

There were quite a few niggly things with the Twin Cam engine, other than the above problems. On early cars, numbers 504 to 531, the starting handle dog on the front of the crankshaft could foul the steering rack. Dynamo brackets would crack, so MG issued stronger cast-iron items. The gearbox ran very hot, and if its breather blocked up, the expansion of the oil could cause leaks.

Experience with racing the Twin Cams over the years has led to the possible cause of the piston problems. After all it was not the timing or plugs, but simply fuel starvation at certain rpm, giving a very hot, weak mixture. The cause was fuel frothing that leaned out the mixture, and then burnt out the pistons, the fault the engine became notorious for. This occurred at two specific engine resonant frequencies that coincided with about 2500 and 5500rpm. The first would pass by quickly, but the second was within the rpm range often used. All SU cars had this problem, but those fitted with Webers did not. The solution, use Webers, or have the SU manifold machined to take the Weber rubber 'O' ring from the 45 DCOE. This fits the SU H6 bolt pattern. The slightly flexible joint that results cures the vibrations.

The engine was still fantastic for its day, and like many highly strung machinery, demanded constant attention. It was not a car to pose in, but to drive.