In 1958 John purchased his car from Graham Keillerup. Prior to John’s purchase, the car was road registered and used very successfully as a weekend racer, winning in the late 1950’s something called the M.G. Road Racing Championship, however no details of this claim are available. 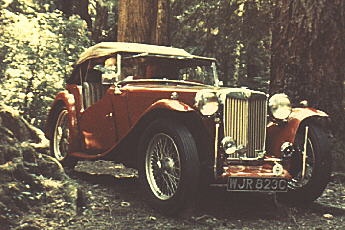 During the fifties the car ran both unblown and blown, equipped with the Shorrock supercharger which can be seen hanging out the side of the bonnet in the shot of the car at Templestowe hillclimb a few months before it was purchased. After looking at lots of TCs (there were lots available in those days) John paid Ł485, which did not include the good engine or the blower.

In fact, it didn’t have much of an engine at all when John bought it, but more of that later. It was otherwise a good basic TC, with standard engine, full guards, Singer Nine bucket seats, painted cream with house paint, battery box removed from the scuttle and the battery box removed from the scuttle and the battery moved back behind the rear wooden bulkhead and telescopic dampers all round. The front springs had one leaf less and were set up higher. The rear springs were tied, so the car rode differently but with teles fitted it felt good except that the rear springs bottomed easily.

So it was a good basis for what John wanted. He advertised in Australian Motor Sport magazine for a Marshall J75 blower but the kit he found had an inadequate drive set up and a 13/8” SU carburettor, so it produced only about two punds boost. Mixture also wasn’t right but the late Barry Papps (the master needle filer) got him going on an interim basis and the car did a seventeen second dead, standing quarter at one of the old Fisherman’s Bend sprint meetings (at the time John felt there must have been a timing error but he didn’t let on). It did prove, however, that a well set up car with suitable gearing could be quicker than some of the clever cars that were never quite right.

Unfortunately the engine didn’t last long. When it was opened it was found to be fitted with Repco four-ring pistons which have been Knurl-sized instead of being replaced. (Knurl-sized was a proprietary process used to revive worn pistons at the time). Brian Sampson overhauled the engine and did some cylinder head work - in fact it was one of the very first engines Brian built after he felt his father’s business to start Motor Improvements.

Shortly after this, in about 1959, the car was severely deformed by a drunk running a red light in two tons (this was pre-tonnes) of Dodge Phoenix. So John set to with a new chassis which came from under Harry Ford’s house. Les Thurgood boxed and strengthened the chassis and Peter Thomas steel framed the body. John came across a TF 1500 block and the engine was rebuilt again round that.

The cylinder head ports were opened up so you could almost put your fists in them - indeed today you can now look down the ports and see the valves. The blower was made to run faster using twin A-section belts and a new carburettor manifold was made to accept a 13/4” SU. A second-hand extractor exhaust system completed things and the car proved to be very fast for a fully equipped road-going square rigger. It was all a bit much for super petrol, but fortunately there were roadside pumps selling 100 octane and sometimes Avgas. You could also buy Benzol at BP stations, but with the gradual withdrawal of these products either a compression ratio reduction or water injection became necessary. After looking at the many off-the-shelf units then available John decide to build his own system which used blower manifold pressure to deliver the water with some simple valving to control it. The system worked well and is still fitted to the car.

Many other modifications have been made over the years, including a conversion in 1960 or 61 to rack and pinion steering using a Triumph Herald rack. The triumph rack is lighter and more compact than a BMC rack and has the further advantage that it is designed to go ahead of the axle. This allowed it to be shortened by about six inches and to mount it upside down on the right hand side of the chassis, using only one end of the rack to connect to the drag link, where it preserves the original geomtry and provides the best steering it is possible to get from a TC.

Some 20 years ago, following another major collision in which John was lucky to survive, the car was started on its third incarnation, but divorce and lack of facilities (and funds) meant the rate of progress was so slow that John was unlikely to live long enough to see the project completed. So he was very pleased when Geoff Norwell, who had just built an exact replica of his own TC, the most notable of which was the Bicentennial event at Oran Park in 1988. As a result John owes Geoff many drives in his car.

For a while, progress was rapid, but then Geoff’s real business began to intrude and the car was moved to David Lower who has done some amazing work, including a completely new blower manifold and exhaust system. The car is due to emerge just before or just after Christmas (1955), depending on trimming and when the final painted bits such as the cycle guards and stanchions come back.

In John’s hands the TC has run at Calder, Winton, Templestowe, Rob Ray, Mount Martha and Fisherman’s Bend and in lots of rallies and motorkhanas. The plan is to give it more of the same.

John’s most notable outing was in a Mount Martha hill climb event organised by the M.G.C.C when John beat Fritz Norden in 1962. Like the famous original axe, not much is left of the car which left the factory nearly fifty years ago, but it has a good history and continuous ownership and it will probably now survive forever.

John’s goal is to compete regularly in future, first outing to be Eastern Beach Sprints and then in circuit races and historic racing register events like Mangalore Sprints, Hillclimbs at Morwell, Tarrengower and Rob Roy.

Now, to help you date your car, a summary of TC and TD production dates, which I’ve lifted from M.G. Talk, the South-eastern T-Register’s Newsletter.