BIRTH OF THE Y RUN

On the 14 March 1947 the first of the 1 1/4 Y series MGs ran off the production line of A Block at the Abingdon works. Fifty years and two days later the Y Type Register of the MG Car Club celebrated the occasion with the first of a number of special events planned for the model's Golden Jubilee - the Birth of the Y Run. 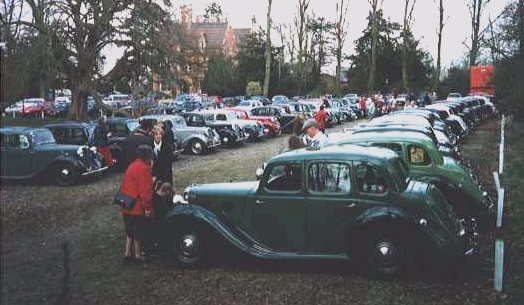 The Event
Dennis Doubtfire the secretary of the MG Car Club's Y Type Register telephoned me in early December 1996 to see if I would be interested in helping him set up the Birth of the Y Run, planned for some three months later. I was keen to take up the challenge and accepted. Dennis suggested that I chose a route around Warwickshire where I live.

A newcomer to organising this activity, I decided to set up some principles. The first was to reach as wide an audience as possible. Dennis advertised in Bulletin, Safety Fast! and MG Enthusiast, I wrote to the three principal classic car magazines and with information from Jack Murray, the Y Registers Collator, I contacted known Y types owners within 50 miles of Leanington Spa.

The second principle was to choose a location for the venue which was easy to reach. I had thought of starting and finishing the run at different points as I knew of two venues where we would be welcomed. In the event I chose the Eathorpe Park Hotel, near Leamington Spa for the commencement and completion of the run as it would help to make the organisation more straightforward. Rod Grinnell, the owner, a keen classic car enthusiast, was delighted to be able to stage the event. The hotel had a large car park and facilities to cope with up to 100 people. Moreover it was located on the Fosse Way and easily accessible from the motorway and major trunk road networks. The third principle was to personally contact as many Y owners as possible. Whilst Dennis trawled the south-east I concentrated on the Midlands making use of the contacts that both Jack and Plain Charlie Jones provided. The personal approach proved to be very effective. Owners were keen to talk about their Ys. Those who were unable to come either had pre-arranged commitments or were rebuilding their cars. Nonetheless, several of the latter turned up on the day to see and talk to fellow owners.

Selecting the Route
Dennis had suggested a run of around 50 miles and that he needed an indication of the route for RAC approval. My initial choice, following minor roads, took in the west of Northamptonshire with the greater length of the run in Warwickshire. This had to be changed as the Jaguar Apprentices had organised a night rally that included Northamptonshire. I therefore amended the route so that it passed through the varied landscapes of the south and east Warwickshire. These included the rich agricultural land along the river valleys of the Avon and Leam, together with the undulating land form of south Warwickshire and the Edge Hill escarpment that defines the backbone of the county, finally passing through the large estate land and flat open landscapes close to Rugby. The total length was in the order of 65 miles.

A key requirement was to find somewhat mid-way where everyone could stop for lunch. There is very little publicly owned areas of open space in Warwickshire. Pub car parks that could accommodate potentially 40 or more cars were few and far between. Burton Dassett Country Park, close to the country boundary, met the criteria but it has no cafeteria. Although I recommended this as the lunch stop I also suggested several pubs close by where people could stop - which they did.

It is of course essential to check the route beforehand, which I did. Moreover, it needs to be in an appropriate car to appreciate any difficulties - which again I did. I made several amendments and as a rule tried to avoid too much crossing of major roads other than by way of a roundabout. This was not possible although crossing were minimised. Where a challenge exists - like the ascent of a steep hill - Sun Rising in this instance - alternatives need to be available and this was provided.

Organising the Day
Good weather obviously helps, although with saloons rain is less of a problem than for occupants of open vehicles. We were blessed with excellent weather (a marked contrast to today - the Sunday after the event as I write this article). Each participant was provided with a folder that included a programme, route maps and guide booklets both on MGs and leisure facilities in Warwickshire. The programme is easy to prepare and is a useful means of spreading the word about a model. The route maps are more contentious. I work in a profession where plans and maps are used all the time. It is, however, easy to forget that many people are not map literate. I prepared A3 size plans to 1:50,000 scale and used the Country Road Map which shows all roads numbered using letters and numbers to denote their status. Even though a written description was included and a note to road numbering was added some problems arose. Perhaps the Tulip method may have been easier to follow.

Although we had verbal confirmation from each participant it would have helped if a proforma had been sent out so that full details of cars and cash had been returned prior to the event. The administration of the morning caused Dennis and I a few minor difficulties. Certainly, this did delay the start by nearly 40 minutes.

The hotel provided us with a room and a table for logging in which was very useful. Sales of some products were available and Dennis was dealing with this, taking in the money, distributing tea tickets as well as noting the registration numbers for each car. A huge number of photographs and video footage was taken on the day; careful compilation of this is important as it provides a unique record of the event. We had appointed an official photographer - Brian Moyse - so hopefully some good action pictures will be published and available for owners.

The benefits of some of these observations would certainly have allowed Dennis and I time to see all the cars.

Conclusions
Organisation of an event is reliant upon commitment and communication. Living over 120 miles apart, Dennis and I kept in touch by telephone and letter which worked well. Commitment was not a problem and I enjoyed driving and checking the route. Keeping the hotelier informed at key stages proved beneficial and created no major difficulties. Maps and instructions need to be simple and easily followed. Pre-booking saves time on the day. Selecting a photographer and collator of information is essential and identifying suitable locations for photo opportunities goes without saying.

The proof of the pudding is, as they say, in the eating and both Dennis and I were overwhelmed not only by the interest shown but also the thanks and appreciation from everyone who took part. 39 cars this time - 50 at Silverstone on Sunday 15 June?
Jerry Birkbeck