In these pages we share with you a set of original MGTF tools. These tools were provided in a tool roll and were stored in a special tool box on the firewall. As noted in the Operation Manual, not all tools were provided at the time of sale due to supply constraints.

Tools listed in the Operation Manual. They seemed to have forgotten the lug nut wrench (or is it the wheel brace?).

Tool roll as described below

Original grease gun that was supplied with MGTF's. The rear brass cap is stamped "ENOTS No.1.H. Made in England" and was plated in nickel silver . The body was blackened or "blued" like a firearm.

Not part of the original toolkit but certainly a needed period component of an MGTF toolkit.

*This item may only be on earlier cars and is not listed in the tools. Some TF owners report having one though. It was supplied in the MGTD toolkits.

I have seen a number of tool rolls for T-Series MG's. The one that we can identify as being original to the MGTF was made of a black tar like covered burlap (hessian). The burlap was brown in color and the covering (outside) resembled a soft pliable fender undercoating.

Order of Tools in Roll

I am not sure about the original order of the tools in the tool roll but this is the order that my tools fit in the pockets the best. From left to right:

The wheel brace, jack, jack handles, tire pump, lug nut wrench, knock off hammer and grease gun were loose in the tool box along with the tool roll. The crank was of course attached to the seat back with clips.

Over the years I have been collecting information on MG toolkits and scouring the swap meets for these tools, particularly the grease guns. Below is a list that may assist owners to find the right gun for their car. I would welcome advice from owners who have an original toolkit gun which is not on this list. I am also looking for old Tecalemit and Enots catalogues. 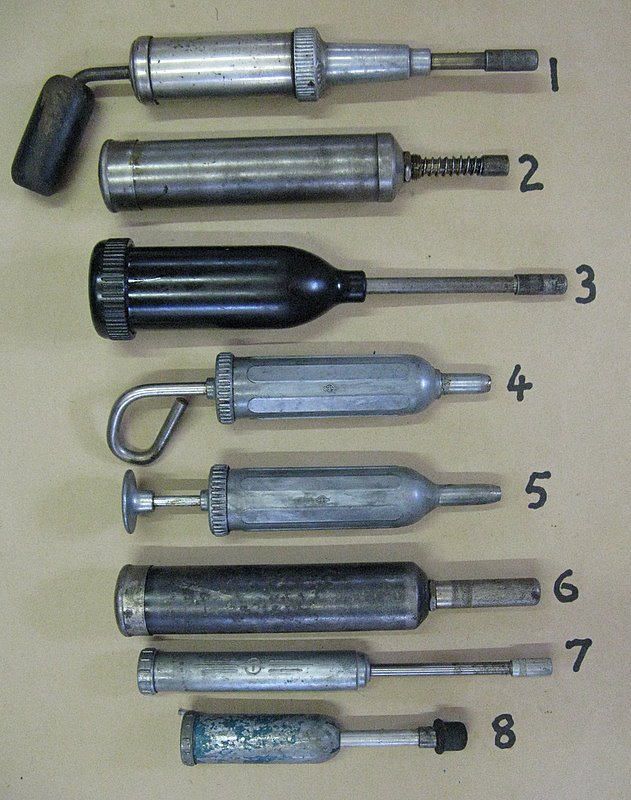